Or listen wherever you get your podcasts

The past few weeks I’ve been working with my brother staining the exterior wood siding of a friend’s home. It’s a big project for two people and we can only work on dry days (which, fortunately, have been broken up by May rains). The upshot is we’ve had a while on location for me to contemplate the borer bees that have been busily drilling holes in her eaves. This is apparently their active season for starting their brood nests. In my last post, Talking to the Bees (Episode 23 on the podcast) I shared stories and a method I’ve developed for relocating bee, wasp, and hornets nests. But the borer bee is one type of bee I haven’t tackled. I suspected they’d be harder to talk to, since they’re not organized into hives around a queen, but solitary bees, burrowing individual tunnels into soft wood (Michael tells me they love untreated pine, hemlock, and cedar siding). The truth is, I’ve been a little lazy and haven’t had a crisis to force me to try to work with them.

However, I had just written the Talking to the Bees post and now here I was working all day listening to borer bees actively drilling into the eaves of this house we’re staining! You could hear the sounds and see the sawdust being ejected out the holes. We also found huge deep holes gouged in the back side of a second building we’re working on where woodpeckers drilled in search of tasty borer bee larvae. That particular wood had been stained with Sikkens, a noted stain offering robust protection that had not worn thin on that wall at all. That secondary woodpecker damage is actually the worst damage caused by borer bees. Most people ignore the woodpeckers and focus on spraying and killing the bees, plugging up the holes, and doing their best to deter them by painting, staining, and finishing. It can be a constant battle if you have exterior wood, and it fuels a multi-million dollar industry.

Fortunately, the homeowner (a lovely human being) was very open to letting me try, and agreed to delay calling the exterminator. This is something she usually does every year or two and would have called immediately, but we agreed on a date later in the month. So, over the next few days, I tried to do what I’ve done with other bees, wasps, and hornets: talking to them in my mind, urging them to build somewhere else, visualizing the situation, and telling them the exterminator would be there in a few weeks! Day after day I heard them chewing away, sawdust shooting out, happily carrying on without a seeming care in the world. I concluded that they either couldn’t hear me or were ignoring me completely. Honestly, I was feeling annoyed. So much damage to an important structure. So I told the homeowner I hadn’t had success so far, and that she should go ahead and schedule the exterminator for the delayed date we’d discussed, and I would keep on trying in the meantime.

Digging Deeper into the Borer Bee

Annoyed, frustrated, my conscience nagging at me, I dug deeper into the borer bee. And came up with information that ultimately shocked me!

This article by the Penn State Extension, “The Eastern Carpenter Bee: Beneficial Pollinator or Unwelcome Houseguest?” goes so far as to attribute up to 15% of food crops to the pollinating activities of native bees like the Eastern carpenter bee. [3] As I looked around to try to find more specific numbers on the role of carpenter bees beyond the broader category of native bees, and to try to understand which crops benefit from them, something occurred to me: the five main species of carpenter bee in North America are all native! Suddenly the scope of the issue struck me with a resounding shock. Native pollinator bees would have had to have evolved in North America as an integral part of the overall ecosystem. That’s how native species work. They find and fill an ecological niche or they keep evolving into something new or they go extinct. But if they’re around and they’re native to that ecosystem, they’re an important part of that ecosystem. Suddenly, their importance to agriculture felt trivial next to their importance to the entire biome of North America!

Not only are native bees essential to some native plants, but the much more famous honeybee is not even native to this continent. And though the honeybee does amazing things for us, the native bees take care of all the nooks and crannies in a way the honeybee was not evolved to do. The U.S. Geological Survey, in an article entitled, “How many species of native bees are in the United States?” goes so far as to say, “Honeybees are key to a few crops such as almonds and lemons, but native bees like the blue orchard bees are better and more efficient pollinators of many crops, including those plants that evolved in the Americas. Native bees are estimated to pollinate 80 percent of flowering plants around the world.”[4] Native bees include a huge array of types, from carpenter bees to leafcutter bees to sweat bees to the super pollinator mason bee. Willy nilly spraying the borer bees suddenly seemed terribly shortsighted. In fact, I would go so far as to say that we cannot consider any native species a pest!

Learn more about our native bees in this publication from the USDA Forest Service entitled “Bee Basics: An Introduction to Our Native Bees,” by Beatriz Moisset, Ph.D. and Stephen Buchmann, Ph.D. It looks really nice! It does soft-pedal the danger of carpenter bees to wood siding–I have seen firsthand that they will drill away regardless of stain or paint if they need a home!

This and other articles point out the threatened status of many native bees, due to habitat loss, climate change, introduced diseases and pesticides — which I’m suddenly so aware of. Even the most ecologically conscientious of my friends (and myself, reluctantly, up until now) will willingly exterminate the carpenter bees that get into their houses. But it turns out there are other ways to manage carpenter bees even if you don’t aspire to talk to the bees! And I suspect that these bees can’t hear that kind of communication anyway.

I discovered a whole industry around providing housing for carpenter and mason bees. Search Amazon for “carpenter bee house,” you will find a ton of options. Google it or search YouTube and you’ll find a ton of DIY videos.

So I actually recruited Michael this weekend to help me build some bee houses, for us here and for the homeowner where my brother and I are doing the staining project. Apparently, you can simply coax them with bee houses because they’d much rather move into ready-made housing than drill out their own tunnels from scratch.

Most people use these to attract mason bees because they’re such efficient pollinators (they’re smaller than carpenter bees, so some of the holes in the one on the left in the photo below are smaller for that purpose). But some nice people like to give carpenter bees houses just because they’re kind-hearted or as a non-toxic way to deter them from drilling into their wood siding. Aren’t these cute?

I haven’t brought these bee houses to the staining jobsite yet, but Michael and I picked a spot on our south facing wall and hung one up there. I don’t think it’s attracted any bees yet. But Michael has apparently been spraying poison in the holes and killing them whenever he finds them!! Which I didn’t know about. He’s promised to give me a year to find a way to work with the borer bees here. We’ll see what happens. I’ve got my fingers crossed and I’m hoping to convince the homeowner to wait until next year to spray. The two bees I saw may be all done drilling out their chambers, and if I can’t get them to evacuate and move into the bee houses instead, then maybe they’ll move into the new bee houses next year. Carpenter bees have a single brood season and lay eggs in mid-summer.

So I’m looking forward to learning about these bees, and I’m so charmed that people have figured out how to build bee houses and that they’re so effective there’s a whole small industry built up around them. It feels like a big revelation to me, and I don’t think you need to be trying to grow a fruit orchard to put out bee houses, but it’s definitely an alternative to dealing with carpenter bees in your wood siding. I don’t think this will create an infestation of more carpenter bees (that was an objection of Michael’s) because they eat nectar and pollen. So it’s the flowers in the environment that support them ultimately. But it will help strengthen the unique environment of North America to protect one of its native pollinators.

Update: So far, I’ve got no takers from the borer bees. It may be too late for this year. If they can’t hear me warning them about their impending doom from the exterminator the way hive bees seem to, then any bee that’s already well underway or done with their brood chamber this year would have no reason to move over into the bee house. Boo! But maybe next year… 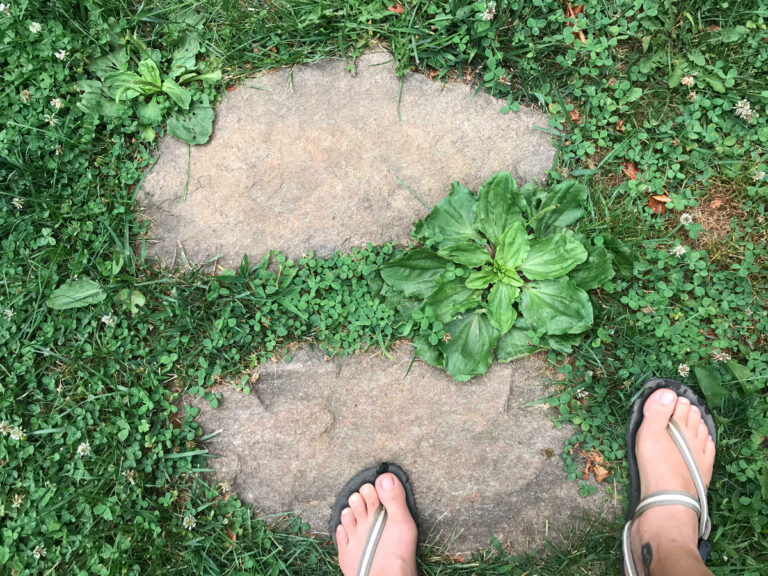 To Coax More Wild Beauty from this Place 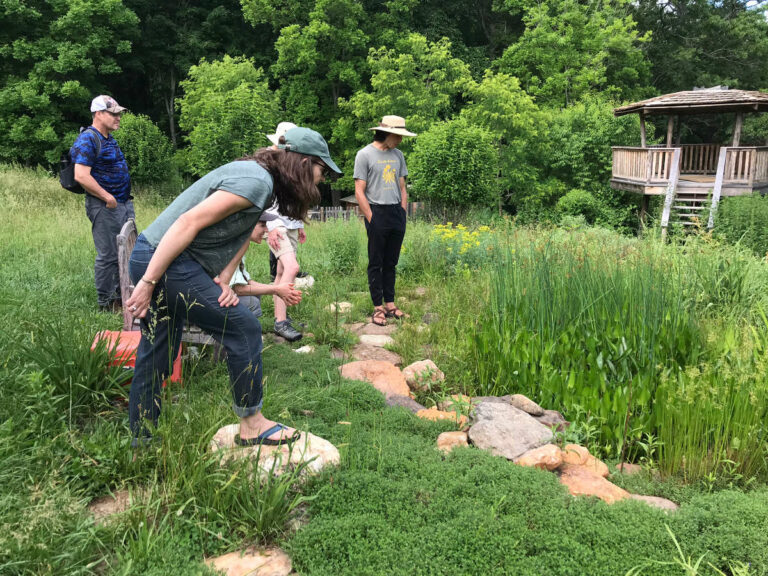 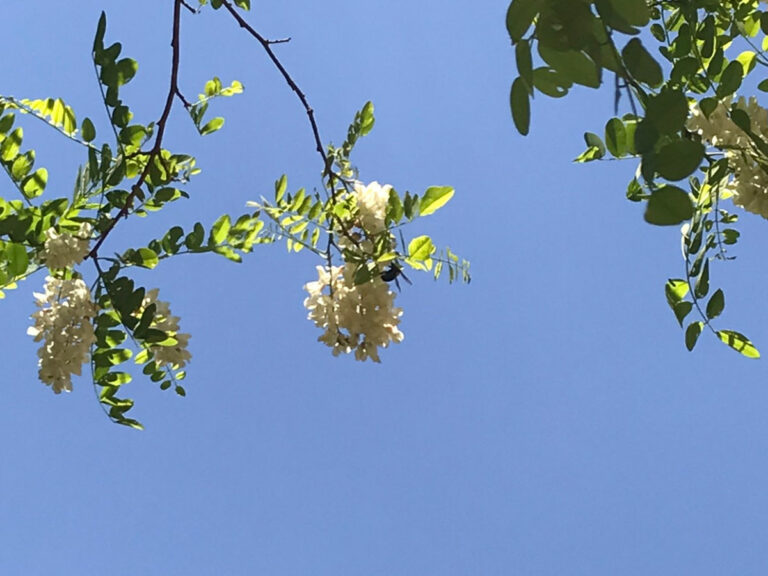